The Character Classes of CrossWorlds, IndiesCrashE3 Indieclicker and AMA on reddit

Hello everyone, long time no see (by the standards of the crowdfunding campaign that is)!

Today we’ll finally do some big catching up on the daily/bidaily updates that we release on our Indiegogo campaign. That means that we’ll tell you about all the different character classes that you can meet in CrossWorlds, the main scenario of CrossCode. We’ll also tell you about how to support CrossCode by playing Indieclicker for IndiesCrashE3 and about an Ask Me Anything (AMA) that has been started on reddit.

The Character Classes of CrossWorlds

Lea is a Spheromancer. That’s at least what that fanboy on the M.S. Solar was saying. But what does it actually mean?

CrossWorlds, the game within CrossCode, is an MMO featuring a number of character classes. And Spheromancer is one of them. 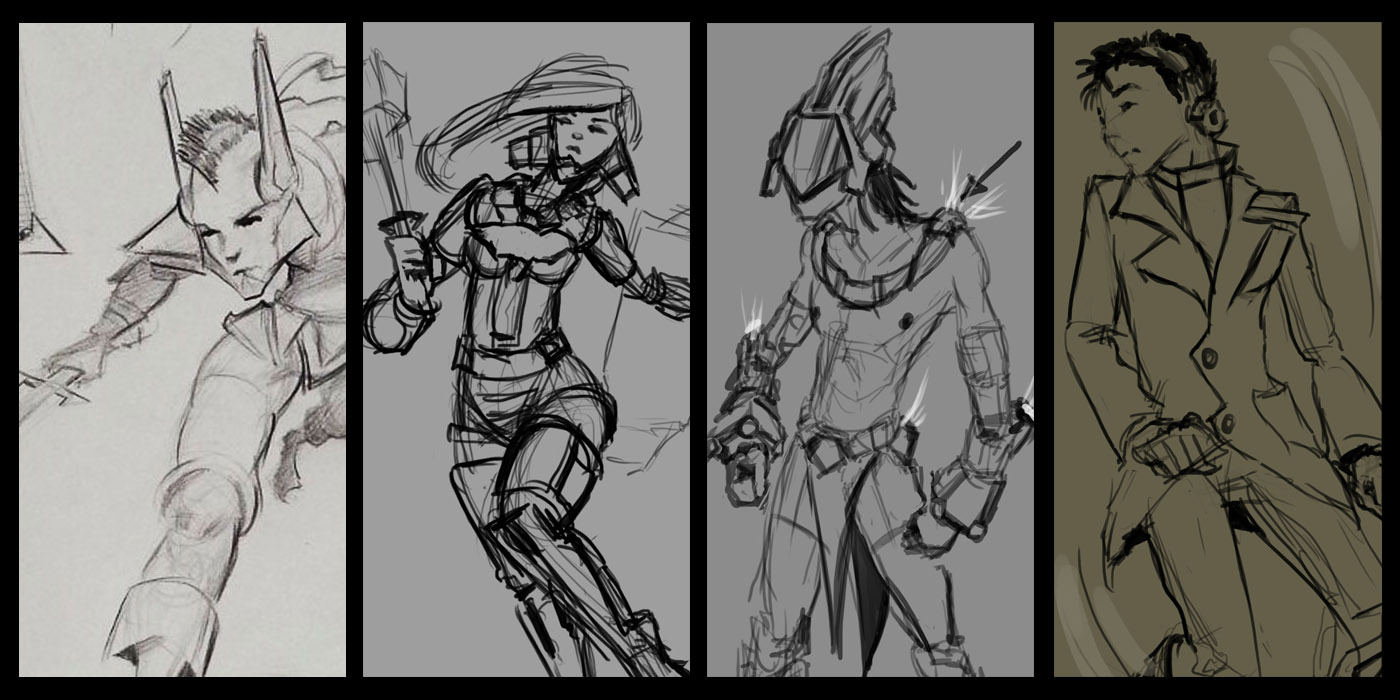 In total there will be 5 different character classes:

All character classes come with individual strengths and weaknesses but all of them have one thing in common: They can use VRP a.k.a. balls.

It just happen that these “balls” have different shapes depending on the character class. For Spheromancers they’re spheres, for Tribladers triangles, for Quadroguards squares… you might recognize the pattern here.

In the following we’ll post more details about the individual character classes together with concept art and sprites (the detailed Triblader art was done by Lachsen, everything else has been done by Frece).

Important note: While it would be awesome to play all the different character classes in CrossCode, for now you’ll only be able to play as Lea who is stuck being a Spheromancer. However, there might be occasions where characters of other classes will join your party.

Tribladers are the all-around melee-class featuring one or multiple triangular swords. In contrast to Spheromancers they have slightly more focus on close combat.
VRP are of course also part of their arsenal and they come in form of triangular shaped daggers.

They still bounce on walls. Because science.

However, Tribladers truly shine when they perform devastating, sword-swinging combos on individual foes or strike through the masses with wide and razor-sharp slashes.

Stat-wise Tribladers are a fairly balanced class with a slight focus in strength. And because everybody in CrossWorlds wants to have an awesome sword, they are ridiculously popular.

Design-wise you will note the recurring triangular shapes in the uniform as well as the color green. For some reason we all associated sword fighters with that color. No idea why. 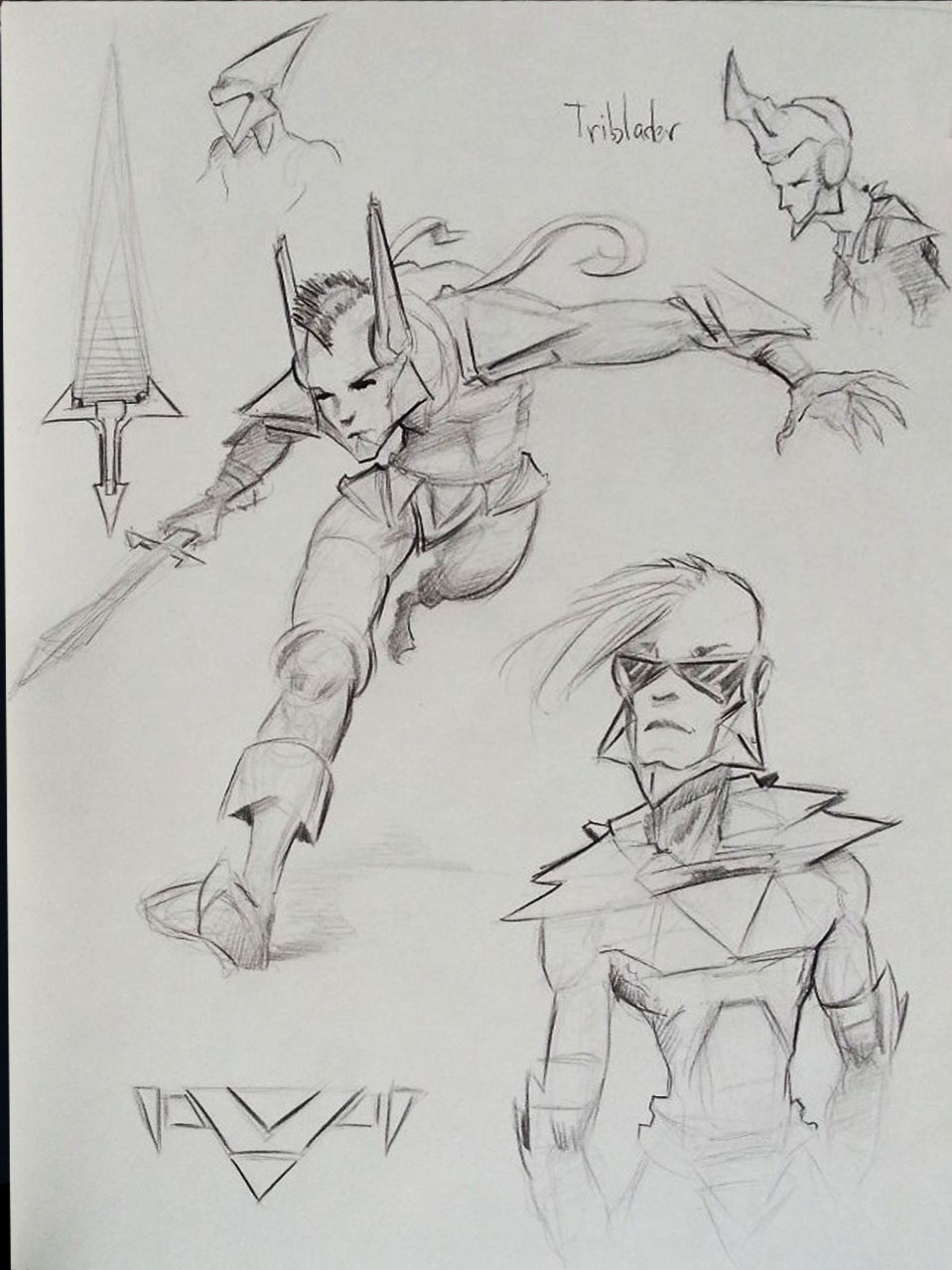 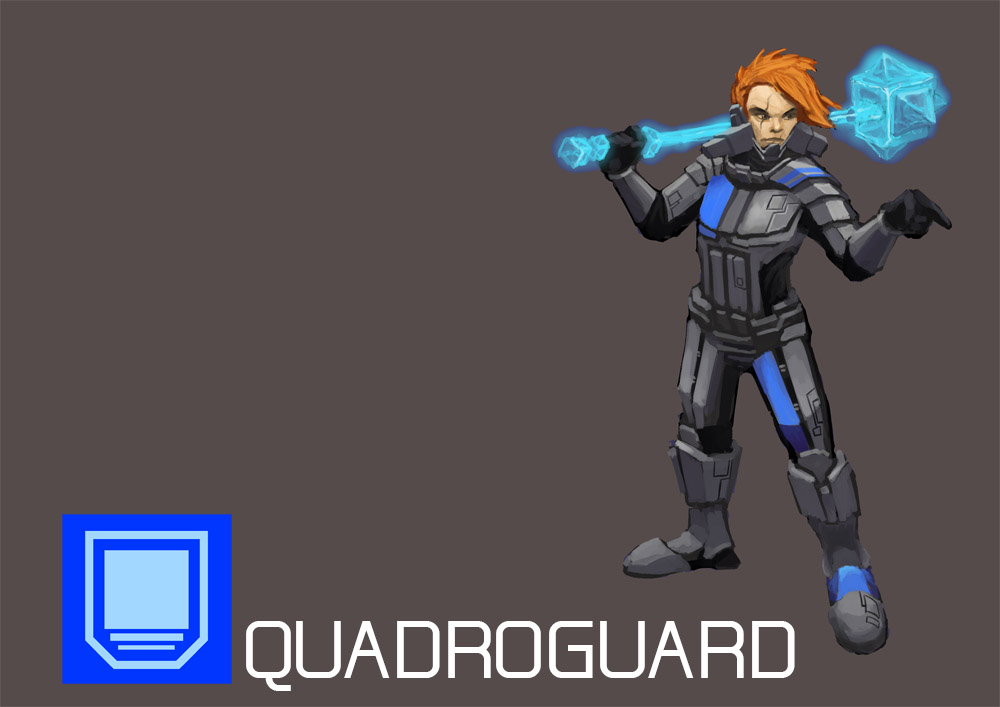 They are the tank class of CrossWorlds, equipped with heavy armor, shield and mace – all of them featuring square/cubic shapes. Their shield can be used to effectively guard against most attacks and if that fails, their heavy armor reduces the damage more than any other class. With such a defense at your disposal there is little incentive to avoid attacks altogether – which is why Quadroguards also tend to be the slowest of all classes.

Of course, Quadroguards are not limited to defense only. They can deal massive damage with slow but devastating shield-bashes and mace-strikes as well! And of course, they can throw square-shaped “balls” for ranged damage. But that’s not what this class is made for. They are the strong boulder on the battlefield, providing that small projectile-free spot behind them for other classes to hide in.

It’s the class for the considerate players ready to take one for the team.

Design-wise, Quadroguards are heavy and patterned with a lot of squares, mixed with blue colors. 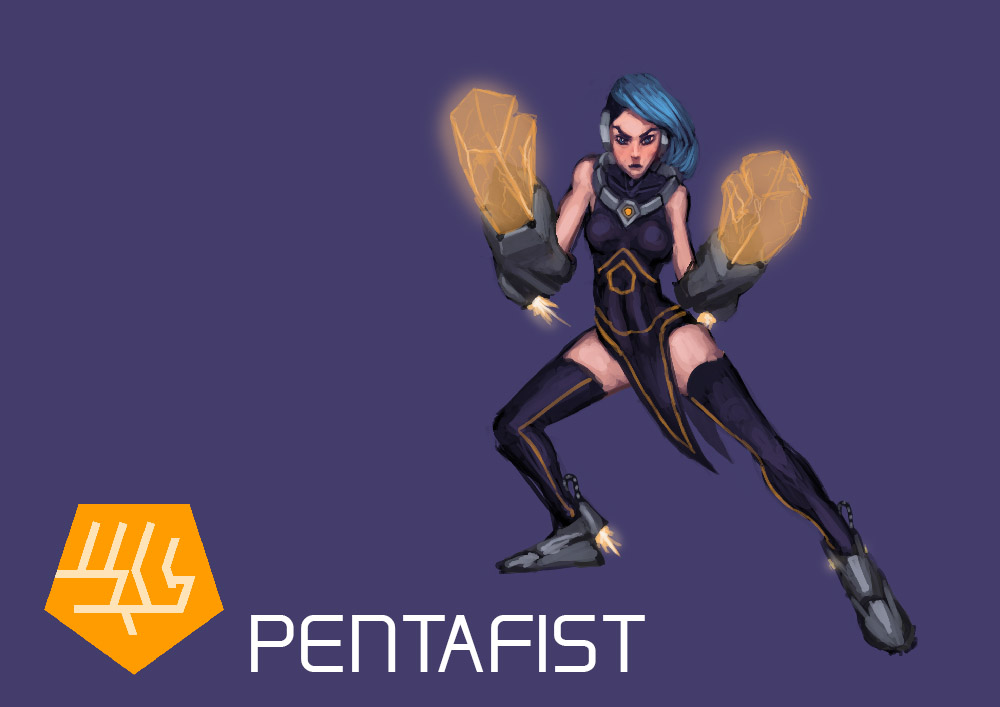 Pentafists are lightly armored but agile players that are best in what you’d expect people with huge fists to do: They punch people. A lot. While having inferior range and less raw power than Triblades and Quadroguards, they make up for it by moving and attacking very fast. That way they can whirl around their foes while harassing them with a hail of attacks.

Their ranged attacks are made up of five-edged VRPs that fulfill the same role as with the other classes, though their small projectiles are fast but weaker at range compared to other classes.

Their HP and Defense is rather low and thus they can’t take many hits, but they got both high Focus and excellent movement options. The thrusters on a Pentafist’s body aren’t just for show –  they make their dashes faster and more frequent than for any other classes.

Because of their flashiness they are a very popular class, especially for lone players, though it usually takes good reflexes and training to really master their style of combat. That’s why many experienced players tend to be more sceptical about overly excited newbies playing as Pentafists.

Design-wise, Pentafists are lightly armored and equipped with pentagon-shaped thrusters. The rest of the design also has a pentagon-theme and is associated with the color orange. 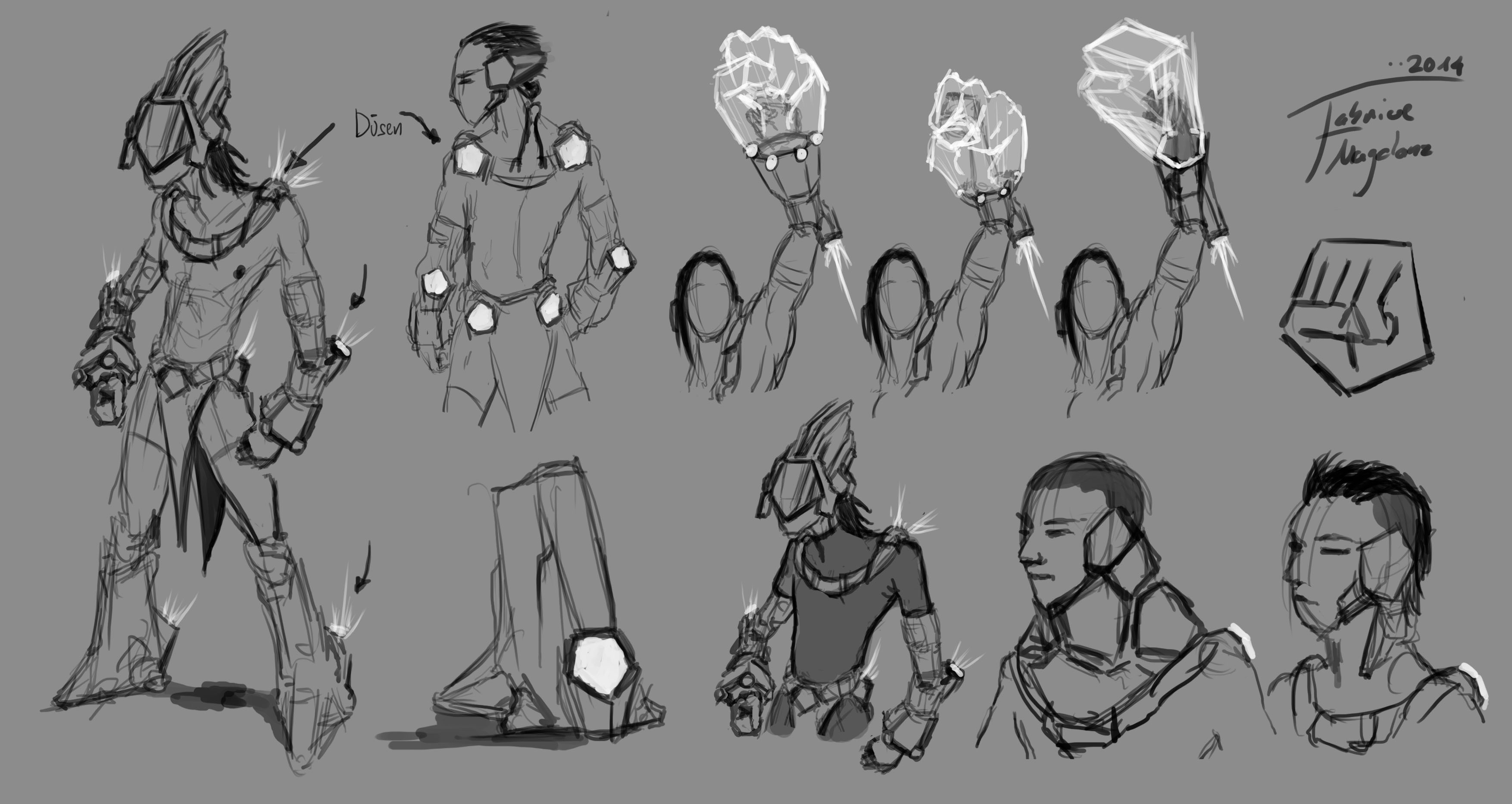 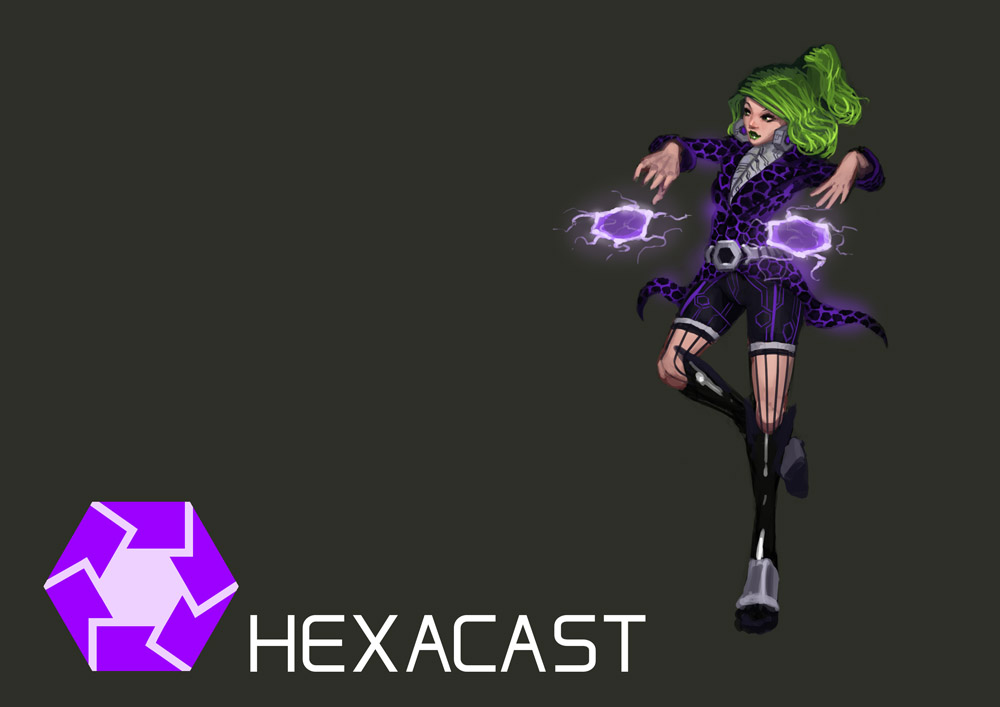 Almost every RPG has some sort of mage class, that deals great damage at the cost of their Magic Points but is rather fragile and useless when relying on it’s physical power. CrossWorlds is a bit different because there are neither classic MP nor separate stats for magic damage, but the Hexacast-class still comes pretty close to that ideal in many aspects.

They might not be as effective as the other classes when attacking normally but can cause some impressive wide range destruction when using special attacks. To avoid direct combat, they are also able to create short-lived static barriers or autonomous weapons that automatically attack their enemies for a limited time.

As you’d expect from “mages”, they have low HP and rather subpar Attack and Defense but also the highest Focus out of all classes. This allows them to deal a lot of critical strikes which regenerate the all-important SP more quickly and are more likely to cause crippling status effects.

And finally, just with any other class, they got the usual VRP-abilities, just with a hexagon-shape.

Design-wise, Hexacasts are dressed in a rather unwarlike fashion, which more resembles clothes worn in academic jobs or to a classy diner: Well-dressed, but not very heavy. Unsurprisingly, the whole design is hexagon-themed and associated with the color purple. 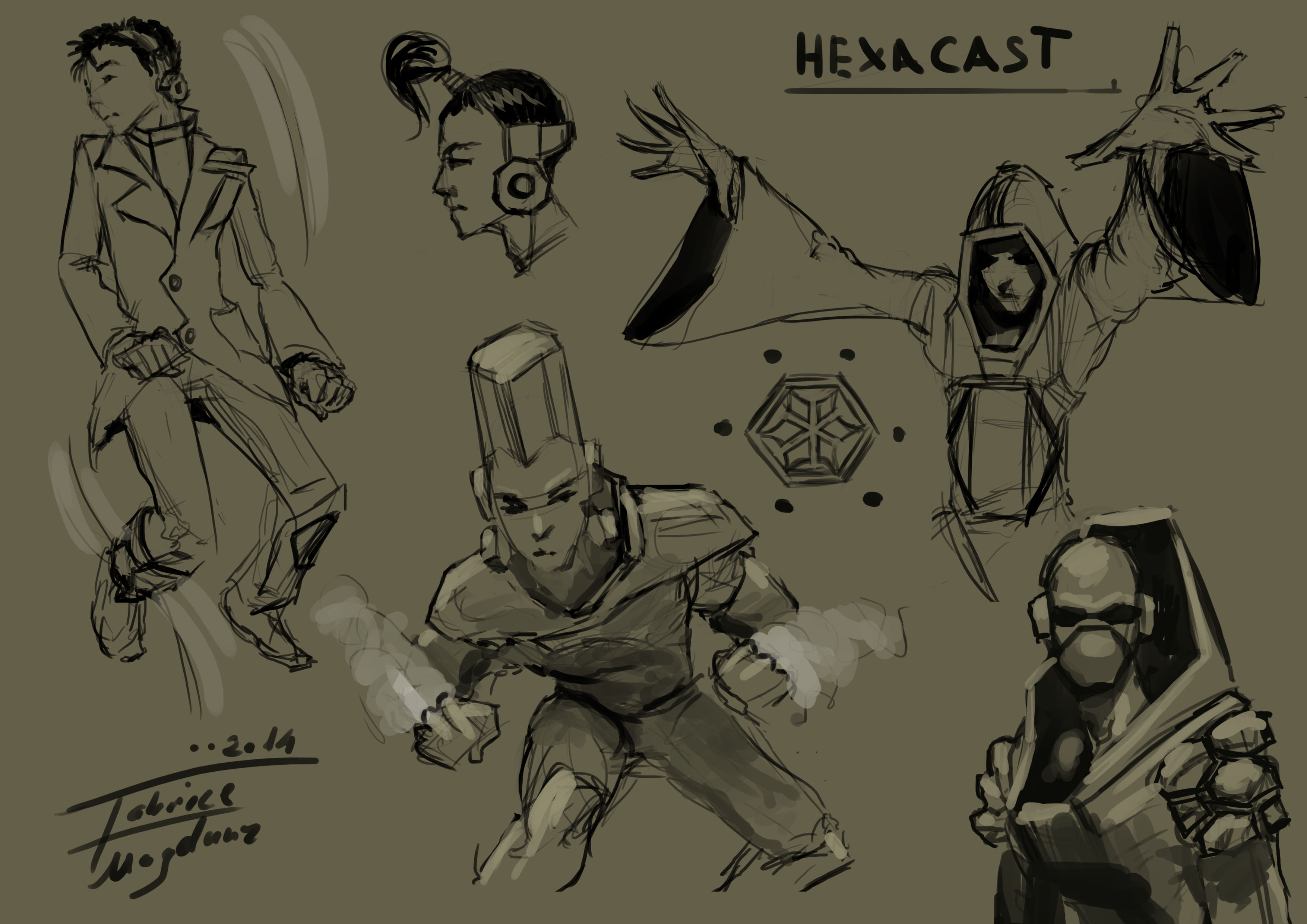 And lastly we got the class that started it all and should be most familiar with you: 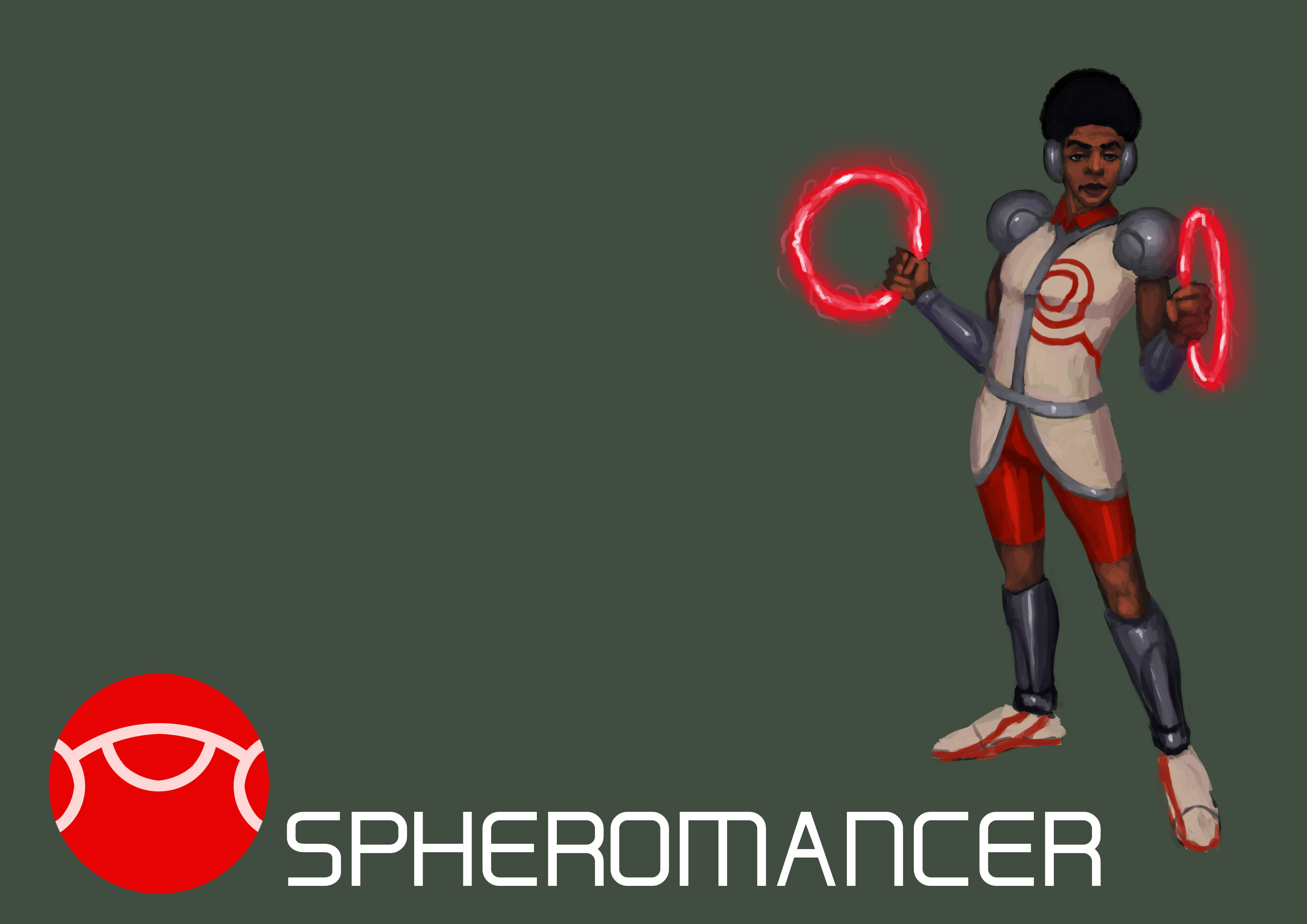 The game CrossWorlds has already been released for a few years when the main story of CrossCode starts. Of course a project of such a scale has gone through a lot of development and additions and thus started with a rather basic setup. Part of that setup was also just a single character class: The Spheromancer.

This class, that all the other classes were originally based on, is mostly known for “the two B”, namely “balance” and “balls”. Its stats are completely balanced out, allowing the players to pursue diverse play styles and adapt quickly to the situation at hand. The signature balls serve as the all-purpose tool and ranged weaponry while at close ranged round chakrams are used for fast attacks.

Design-wise, there are few hard edges and corners, unlike the other classes, and a lot of round shapes and circles. The clothes are often quite plain in the vein of futuristic simplicity. The associated color of the Spheromancer is red.

Though Spheromancers are in no way inferior to the other classes; their more hybrid, less specialized abilities and the less fancy design made them become a rather unpopular class, compared to the other classes that were added to CrossWorlds over the years. But of course, you as the player of CrossCode will not be able to give in to such prejudices, because both Lea and Shizuka are playing this class! 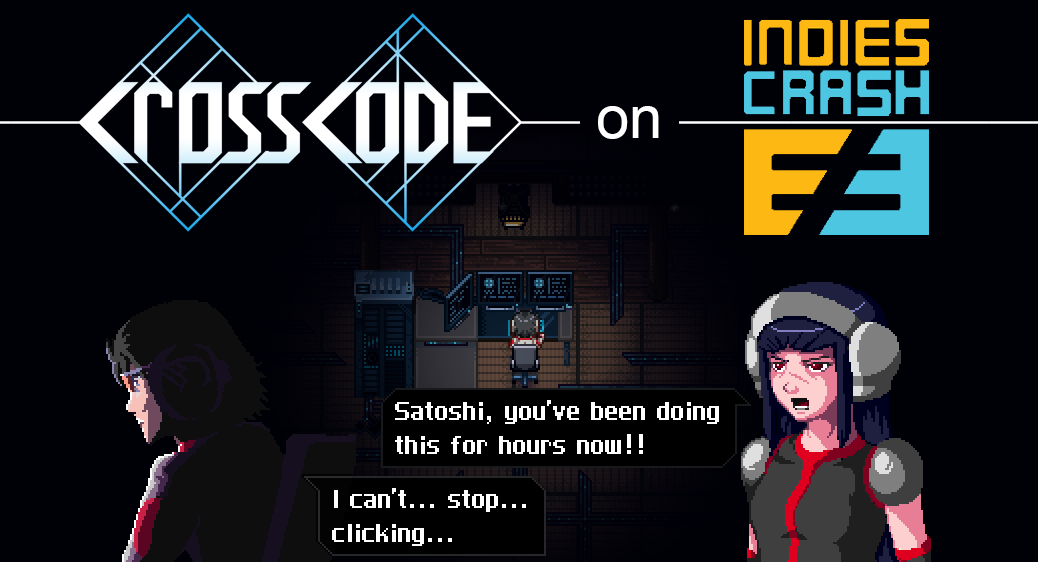 Indies Crash E3 is a competition to select 5 Indies to visit E3 this year!

This is not done with a simple vote, though. They actually combined the whole selection process with a mini-game. With a lot of clicking. Be warned: it’s kinda addicting.

All the points you collect in this game will be added to the total score of CrossCode. The top 5 games with the highest score win the competition. So far, we’ve been doing great, as CrossCode has defended the first place for quite some time and is still safely on second place after it got overtaken by Prismata from our SxSW buddies Lunarch Studios! While this might be a comfortable position, there’s no reason not to try to attack 1st place again! So… If you have some spare time and want to support CrossCode, feel free to contribute to our score… by clicking endlessly.

About 20 hours ago we started an AMA on reddit! That’s right! A lot of you requested it and we had a super awesome mod from the /r/wiiu subreddit helping us with all the reddit mojo. 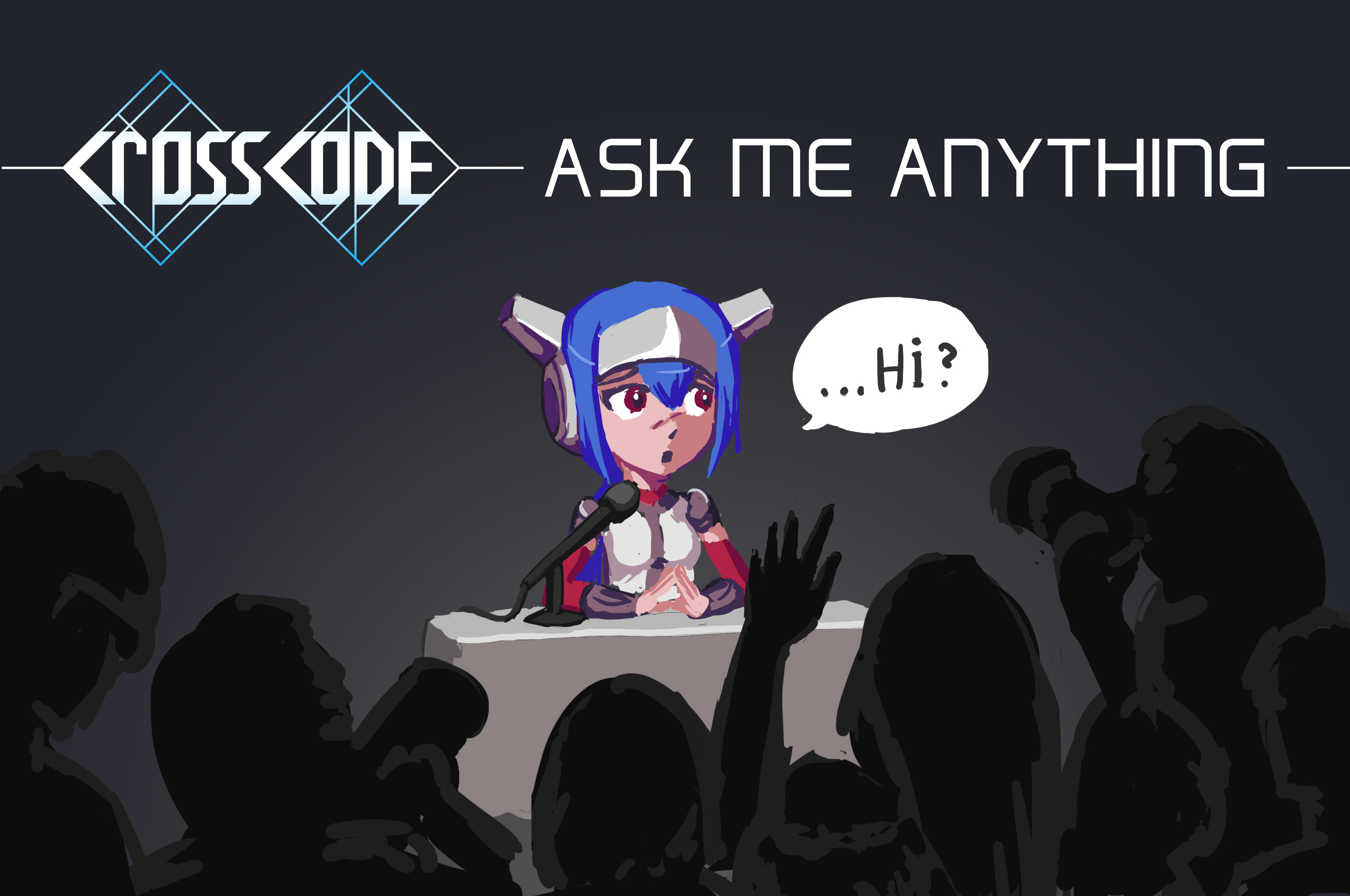 It has already been running for a bit and a lot of interesting questions have been answered. But maybe you can still squeeze in a few questions of your own before we officially call it quits (it’ll most likely go on till today at around 4:00PM PST or 1:00AM CEST)! Take a look here.

And that’s finally it. This might’ve been one of the biggest updates ever and I hope you got through it unscathed.